Rin and Yukio find that their friends from the monastery where they were raised where attacked by a masked individual who covered their entire bodies with an seemingly indestructible spider web. While pursuing the culprit, whose objective is to attack anyone related to the son of Satan to make him suffer, Yukio stumbles into Neuhaus who flees without further explanation. Despite having his sword sealed by the web, Rin insists to go after the masked one but is held back by Yukio and Shura, until he gets word that his Suguro, Renzo and Konekomaru are being attacked too and rushes to help them. By managing to control his flames properly, Rin defeats the attacker, who flees thanks to Neuhaus who reveals her to be his wife, and safely releases his friends. 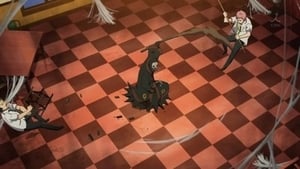