Shiemi in the Exorcist Shop finds a woman lying unconscious in their garden. Meanwhile, Yukio meets an old man on a train, who claims to be his grandfather, and reveals the truth about their Mother who was burnt alive by the Vatican proclaiming her to be a witch. He takes Yukio to a secret anti-demon Dragoon Laboratory and suggests Yukio to join him now that Shiro is dead and Mephisto has been arrested. Prof. Neuhaus is being interrogated in the Academy’s Great Cell by Shura where he tells everyone(including Rin) that his wife,(Masked Man) Michelle, is nothing but a corpse with a certain demon in her body, intending to kill Satan but she was not resurrected from death by him. Rin finds out the woman in the garden to be Neuhaus’ wife but Shiemi stops him from killing her. Paladin Angel appears in the garden to kill the demon but confronts Rin. Later, Michelle dies protecting Rin from the Order. 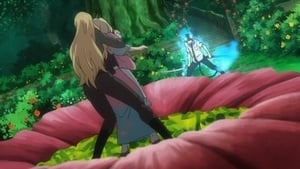